Accessibility Menu
Accessibility Help
Press ctrl + / to access this menu.
5
Like what you read? Snap in response! You can snap as many times as you like.
ExperiencesIdentityIntersectionalityRepresentationSpotlight
Announcements   MLK

a Q&A with Aisha Moodie-Mills 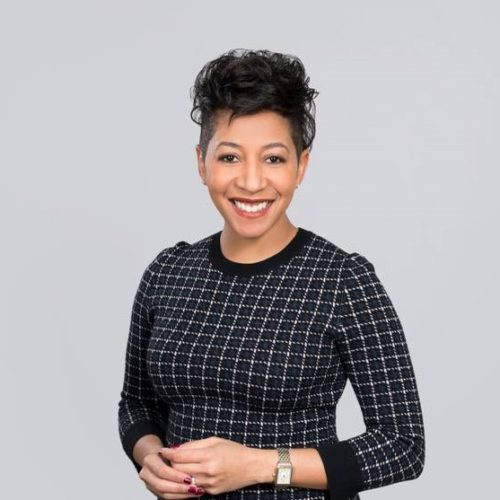 Aisha Moodie-Mills (she/her) is a progressive strategist with more than a decade of experience in politics and policy. As a well-respected advocate, she has been named one of the “OUT 100” LGBTQ influencers, “The Root 100” African American trailblazers, and a top “40 Under Forty” LGBTQ leader by The Advocate.

In her current position as a political commentator on CNN and a social impact advisor, her work explores the intersections of race, sexual orientation, economics, and public policy.

As part of Martin Luther King, Jr. Week, Moodie-Mills will give a keynote address in relation to the Week’s theme: Face Everything And Rise.

James L. Farmer, Jr., leader and activist of the Civil Rights Movement, highlighted the true process of social change when he stated, “Anyone who said they weren’t afraid during the civil rights movement was either a liar or without imagination. I was scared all the time. My hands didn’t shake, but inside I was shaking.”

In this Q&A with Moodie-Mills, we ask her how she overcomes fear and faces everything and rises throughout her life.

When have you experienced fear and how did it affect your work?

As a Black lesbian in America, frankly, I often experience fear because we live in a society that has a very long history of systematically and culturally denigrating people like me. But this fear also sparks a righteous indignation in me to fight for justice for all and to ensure power for all the people—the politics to me have always been very personal and I lead through a personal lens. Fear on its face can feel fragile, but I encourage everyone to draw strength from that which makes you nervous and to lead with deep consciousness around it. It’s when you connect to what affects you most that you show up authentically, fight passionately, and bring the greatest integrity to your quest for change.

What motivated you to overcome the fears and sacrifices around your work?

I don’t think of my work as a sacrifice, I think of it as a service. Honestly, I am grateful to have an opportunity to make a living doing work that lifts up others and that helps to make our nation, even if in the tiniest way, a more welcoming, more inclusive, and more just society for all people, no matter our race, or gender, or sexual orientation, or birth country or ability. It’s really a blessing and honor to be able to fight for what I believe in, I’m often reminded that so many people are unable, so many around the world live in fear of persecution for simply standing up for themselves. I am also inspired by these powerful words from the late great Audre Lorde: “When I dare to be powerful, to use my strength in the service of my vision, then it becomes less and less important whether I am afraid.”

Do you have any particular heroes/people you admire?

My Mommom and Poppop—my paternal grandparents who raised me. They were dirt poor Black folk from South Carolina who grew up with nothing other than a value for education and fled the south like so many other Black Americans during the 50s running from the oppressive Jim Crow laws that (as I learned later) almost killed my grandfather. It was through them that I learned discipline, and dignity, and the spirit of reaching back and lifting up those who need a hand. My grandparents left with nothing but ultimately became middle class through hard work, military service, and the fact that even though their home state was a bastion of hatred and racism, the ideals of America writ large and our democracy allowed them to grow despite the challenges. It is because of them, and all they overcame that I am where I am today. I have such a reverence for my ancestors generally — at a family reunion this year we traced our lineage back 8 generations! My great great great great grandfather was born into slavery, and despite families being torn apart and the horrendous conditions we somehow continue to grow and stay connected. Reminds me of one of my favorite Mexican proverbs: “They tried to bury us, they didn’t know we were seeds.”

Frederick Douglass once acknowledged, “If there is no struggle, there is no progress.” During your time at Victory Fund, one of your main goals was to support LGBT candidates running for governmental positions at all levels. What progress have you observed, and what do you perceive to be the biggest areas for improvement?

Well, when I took the helm at Victory there were about 500 out elected officials around the country, today there are close to 700! That is progress. There is also a direct correlation between the number of our elected officials and the advancement of LGBTQ rights all around the country. As more and more LGBTQ people became legislators and policymakers, they were able to help to change the laws and drive us to a more equitable policy landscape. Our motto at Victory is that Representation Matters! If you’re not at the table you’re on the menu, which is why I continue to believe deeply in the power of diverse representation as a way to drive progress at all tables.

How do you see Dr. Martin Luther King, Jr.’s beliefs in movements today?

Dr. King’s beloved community is the beautiful diverse society we have today. If we all continue to strive towards uplifting his ideals of inclusivity and justice, and LOVE, we will ultimately see ourselves as united far more in the values we share than the superficial differences that so often divide us.

What advice would you give individuals who are experiencing fear around the fight for freedom and equality?

Personal safety is number one! There are real threats that we face on the front lines of this battle for justice and I would encourage everyone to first and foremost prioritize your physical and emotional well-being beyond all else. We can only help others when we are safe, secure, and well, and it is often a daily practice to make sure have those things. Beyond that let fear motivate you to stomp out hate!

Hear more from Aisha at her MLK Week keynote address! MLK Week is an annual event that provides the campus community a platform to discuss contemporary civil rights issues and race in America. This upcoming MLK Week’s theme, Face Everything And Rise, will challenge us to redefine the definition of fear and its role in the fight for freedom and equality.

A full list of MLK Week events can be found at diversity.utah.edu/mlk.