This story is written by a guest author. The views and opinions expressed within it are those of the individual author and do not necessarily represent an official stance of Equity, Diversity, and Inclusion or the University of Utah.

In Spring 2019, students in Professor Annie Fukushima’s course, entitled Diaspora, Transnationalism & U.S. Community, contributed to an interactive activity inspired by the Institute of (im)Possible Subjects’ Migratory Times project. They applied the content they learned on socio-legal, cultural, and ethnic studies perspectives on immigration to creative projects including presentations, written work, and visual display.

Migratory Times began in 2016 as a series of pedagogical research and exhibition events focused on the politics of race, gender, geopolitics, and global migration. Since its emergence, the project has created over 30 international events with numerous collaborating artists, researchers, and cultural and educational organizations.  Professor Fukushima, a founding member of the Institute of (im)Possible Subjects, created this assignment for which the students hosted an oral and visual tour in April 2019 of their projects in the J. Willard Marriott Library Plaza. They called the project Beyond Walls where a display of seven stories surrounding migration was placed near the Library.

Beyond Walls focused on the impact of the current political climate as well as how the notions of walls and borders affect our ideas of what migration means. The featured stories personalized migration and challenged the current rhetoric on how a migrant story looks through recent and historical narratives speaking to Asian, Latinx, African and South-West Asian migration. The stories were carefully chosen and placed on display where only snippets and quotes were provided to portray Beyond Walls’ message of complexity and draw in passersby. Pieces were placed along walls, directed movement toward a wall, and adjacent to or between walls. Some stories were sourced from the students’ own family and others from the stories of scholars, taking place in various countries and at various borders. Though the range of narrative was vast, all equally conveyed a humanized story of migration – a perspective the media often neglects.

These stories chosen for the Beyond Walls project were aimed to interpret the complex story of migration and utilize the symbolism of walls shaping lives: 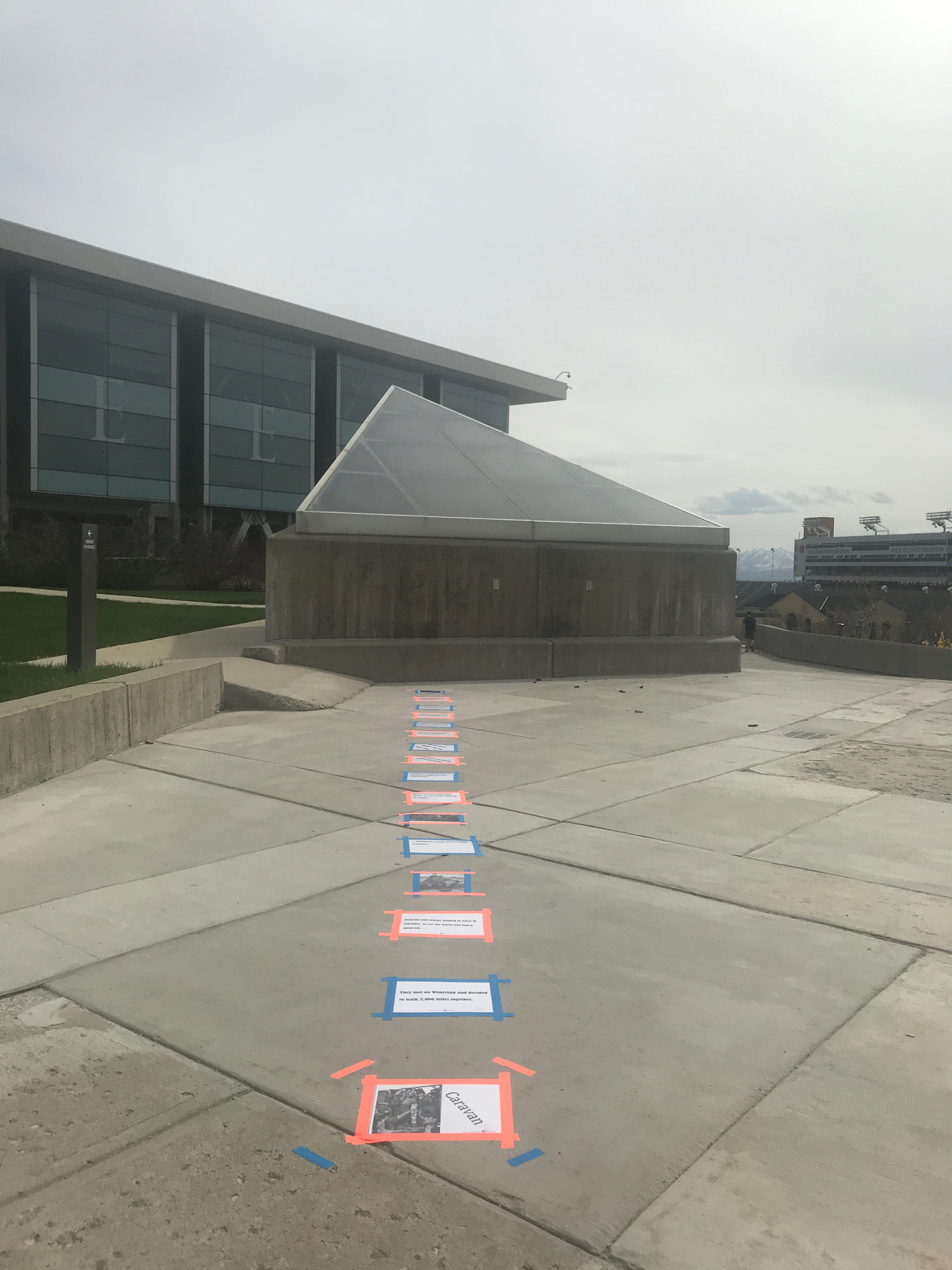 Oscar Alfonso Mejia’s chosen story occurred just months ago in January 2019. The story took place at the Mexico-Guatemala border, a strategic choice made by Mejia to stray from current discourse followed by the media that only covers the Mexico-United States border. Mejia explained, “the mistreatment of migrants crossing into the Mexican border is a real, pressing issue, and the narrative I chose to excerpt from a recent National Geographic publication highlights a story about 3 friends that met through WhatsApp and decided to radically change their lives by joining the caravan to the United States.” Mejia’s chosen story focused on the reasons three friends made the decision to migrate and the tests they faced during their migration through Guatemala and after reaching the Southern Mexico border. 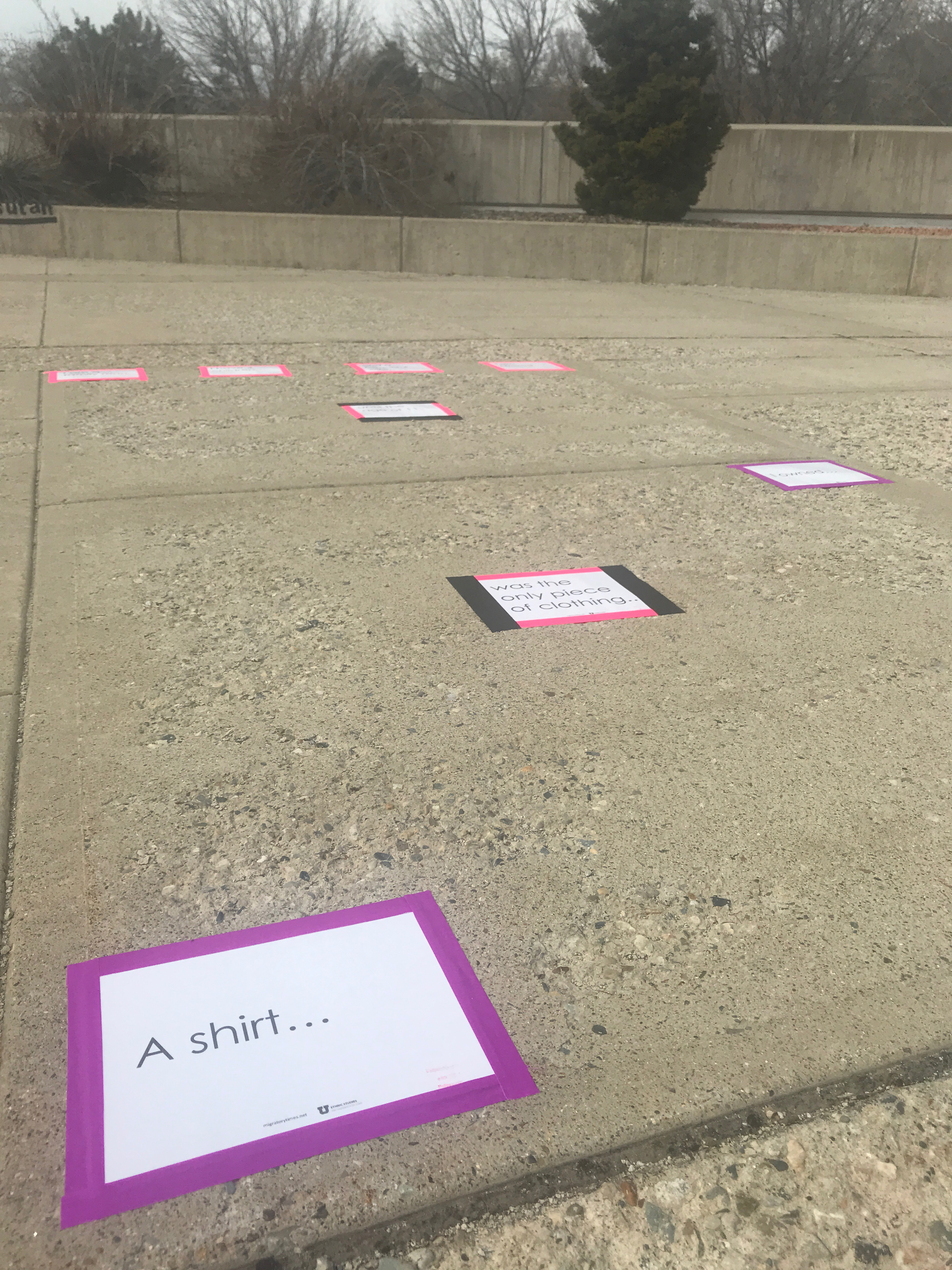 Katherine Neilson chose a very personal story by interviewing her sister’s husband, Arlo D. Otomo. She asked about his life in Ethiopia and his migrant experience through adoption. Neilson, being adopted herself, said she relates to Arlo but admitted, “the circumstances surrounding our origins are vastly different. My narrative lies in placement. Arlo’s in loss; a loss that thrust him into several transitional states.” Neilson’s interview reveals that Arlo lost both of his parents at a young age which forced him into adoption, then into transition to the United States. 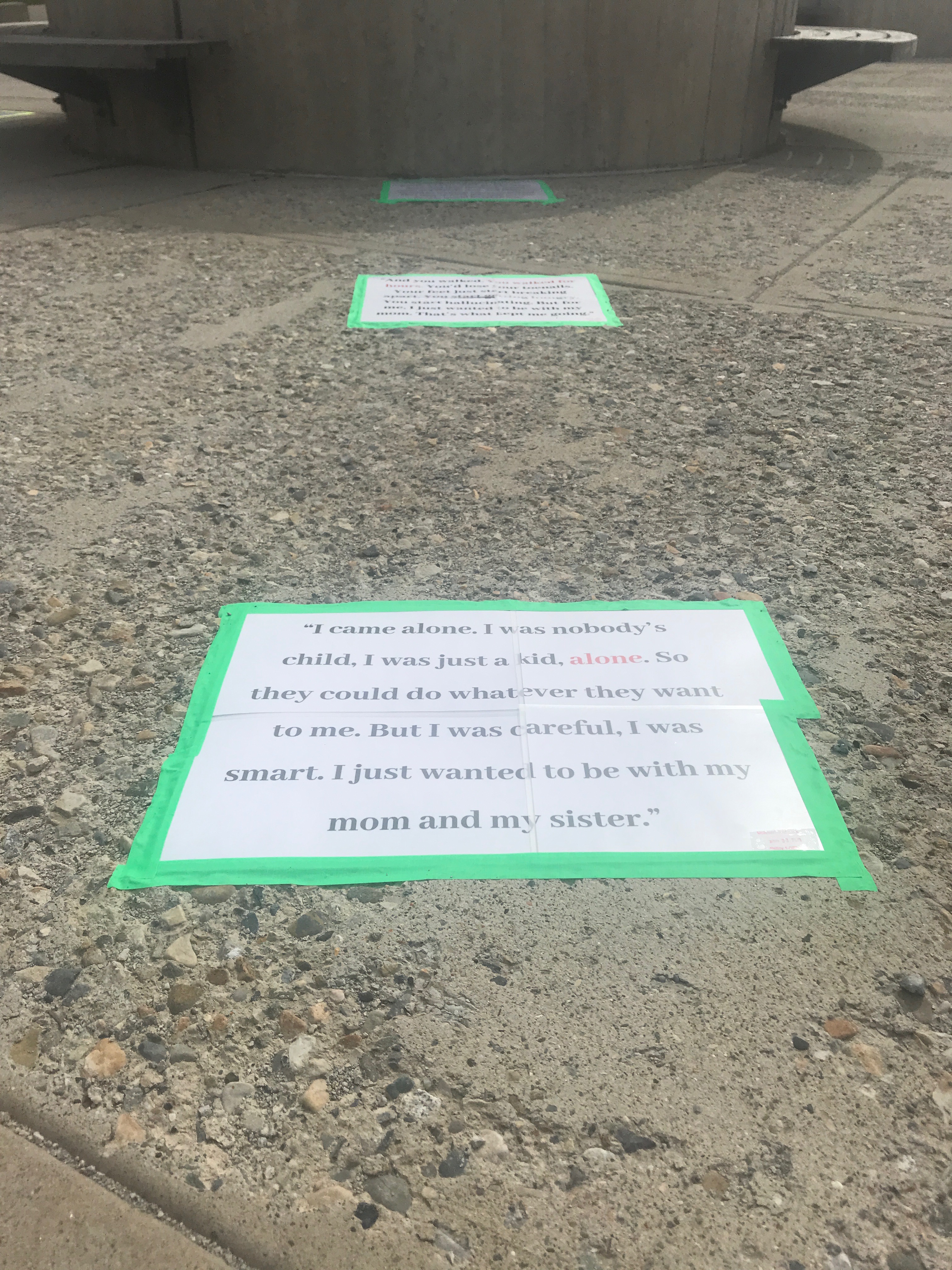 Alex Son chose two stories. One that he strongly identifies with, as a Cambodian himself, centered around the Cambodian genocide. This story described SreyRam Kuy’s pursuit of education after her family escaped from Khmer Rouge. Son explained his choices for his display, “You read… and you’re walking towards a border. I left it ominous and without exact meanings to it. Because I wanted it to be interpreted.” 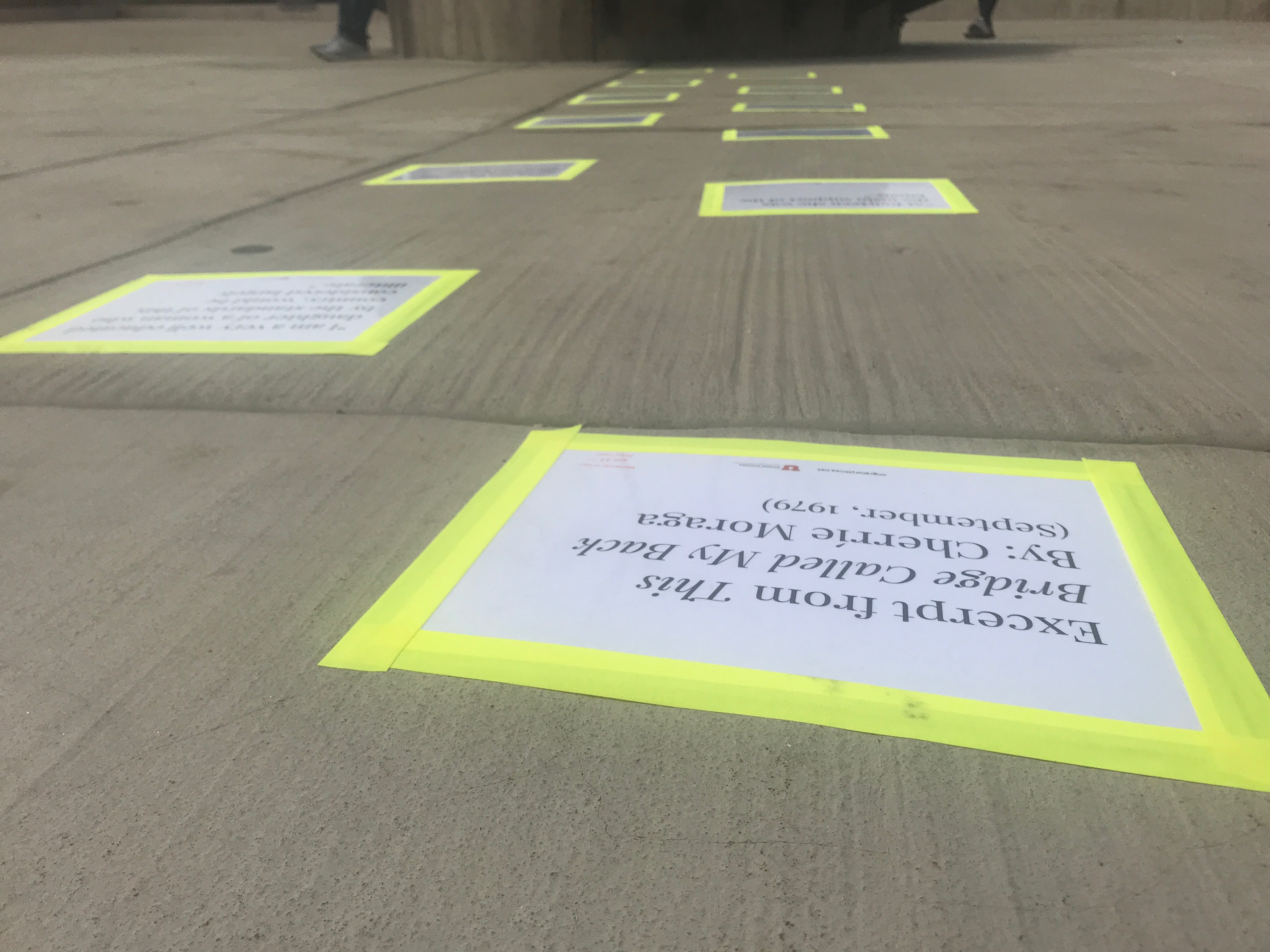 Sierra Holmes’chosen story was from the book This Bridge Called My Back and utilized an excerpt by Cherríe Moraga entitled La Güera. Holmes explained that Moraga doesn’t describe physical borders and walls, but what comes after them – the walls that exist generationally after migration. 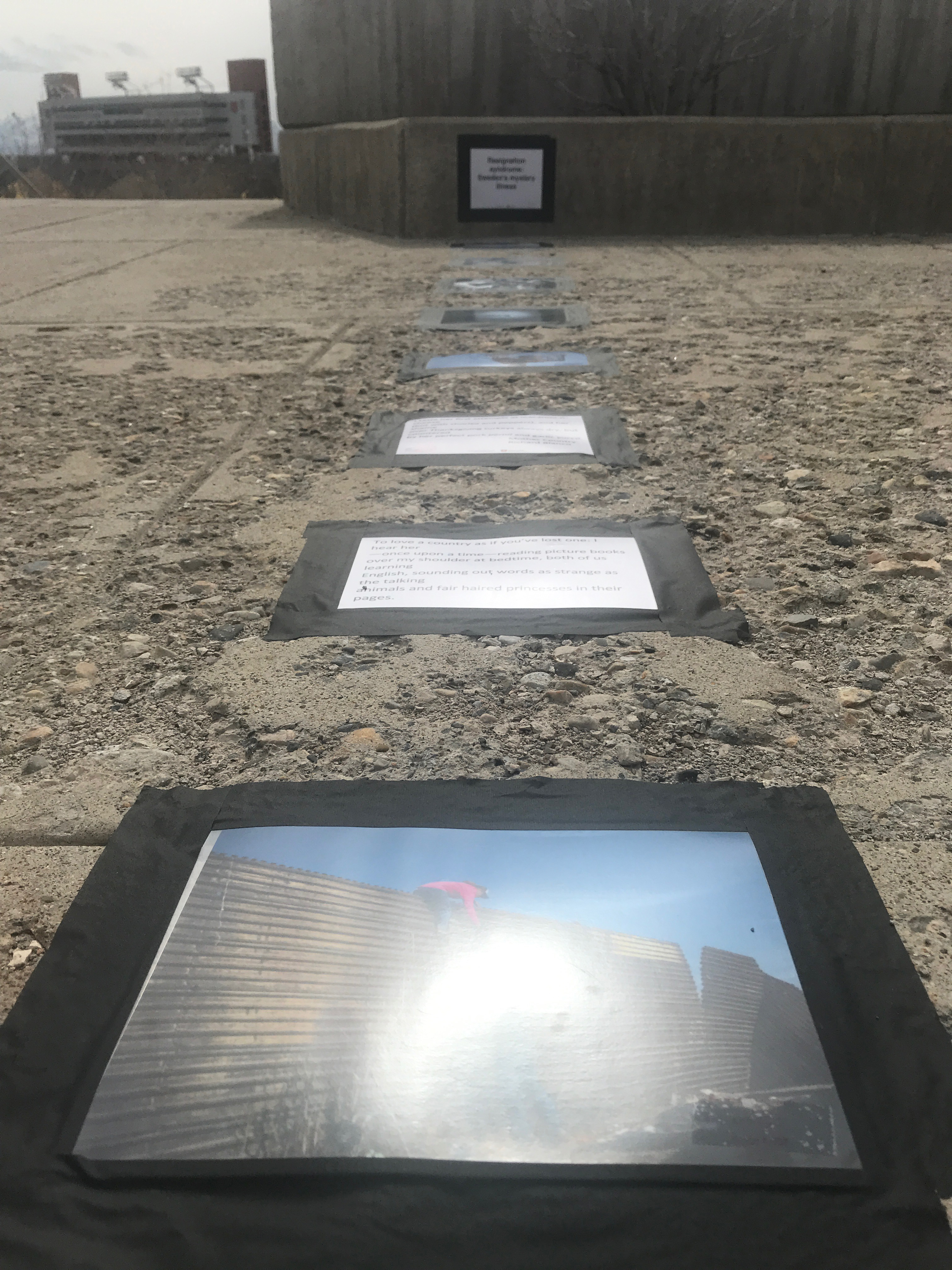 Claire Adams chose a story on European borders and their lack of surveillance. Adams contrasted the methods of border enforcement used when crossing the Mexico-United States border and the oversaturation of surveillance there with the lack of surveillance and help provided at borders crossing into Europe. Adams’ interpretation of her story concluded with recognition of what is called “Resignation Syndrome.” – trauma-induced loss of appetite and sleep resulting with a semi-conscious, vegetative state.

Photos and Summaries of each story can be found on migratorytimes.net.