MLK Evening with the Arts

Celebrate local artists in an evening of art and joy at the Marriott Center for Dance. The event will start with an art stroll in the lobby of The Hayes Christensen Theatre with works by Daney Lin and Erica Houston and continue with performances in the theatre by Spirit Machines, Wynter the Poet, and Bashaun Williams.

Please plan to arrive at the venue promptly as the venue’s capacity is 75. Per university guidelines, masks are required at all events.

Spirit Machines is quickly gaining national recognition as the band bringing rock n’ roll back! Led by PhD graduate Dr. Pepper Rose, this independent rock band has already been shared by rock legends TOOL and Alice Cooper, and has made headlines on American Songwriter, Loudwire, The Salt Lake Tribune, and more. Spirit Machines is one of Utah’s most unforgettable live acts. Don’t miss the chance to see for yourself why!

Daney Lin was born in the heart of Murray, Utah. Whether it has been music, dancing, theatre, or painting, he has been surrounded by art his entire life. Residing in Salt Lake City, Utah, Lin is a visual arts teacher at West Lake STEM.

Through his primary medium of acrylic painting, art has allowed him to fully express himself and cope with mental illness, including anxiety, Bipolar Depression, and ADHD. He is deeply influenced by Asian and Hip-Hop culture, which have impacted the way he visualizes the world.

Art is his way of sharing his life experiences and interpreting his surroundings. Lin truly believes art has saved his life and feels it can positively affect others in a similar way.

A Queen of many crowns or hats. Wynter has been a Poet and published author since the age of eight. Having her first poem published in second grade, Poetry was the first time she felt like she could express herself with meaning and purpose. Wynter made her debut in the 2018-19 Salt Lake City Slam Poetry Season and made the team in the same year. She toured with the team for the year sharing her words state to state. She creates poems about justice, healing, love, self love, queerness, and the power to overcome.

She has been featured on Write About Now Poetry.

Wynter is the cofounder of Utah Black Artists Collective (UBLAC.)

She has a chapbook “A Glimpse Into Surviving Wynters Storm” and is a featured artist in Beyond the Neon Anthology.

Erica Houston was born in Melbourne, Florida in 1980. At the age of 6, she and her family moved to Salt Lake City, Utah. While attending Highland High School, her art teacher, Pat Eddington, introduced her to Prismacolor pencils. She says, “While working through this medium, I found and continue to find truths about myself and how I see the world”. She continued her art education at Salt Lake Community College, as well as Ringling School of Art and Design in Sarasota, Florida.

In 2006, she married the artist Blue Critchfield. Soon after, they began sharing a studio located in downtown Salt Lake, which they opened for the monthly gallery stroll between 2006 – 2010. For many years, she has enjoyed supporting the invaluable programming provided by UMFA, UMOCA, and Art Access by creating works for their fundraisers. In 2019, she became the first African American artist to be included in the Salt Lake County public collection.

The artist states, “I create my art to honor moments of quiet awareness when a person is willing to see themselves and their world more clearly.”

You may view Erica’s work on Instagram at www.instagram.com/ericahoustonart/

Bashaun Williams is a native to Lubbock, Texas. He started dancing at the age of 16 with Ballet Lubbock, under the Artistic Direction of Yvonne Racz-Key. While in high school, Bashaun was the only Sophomore to play Varsity basketball for Lubbock High. He went on to become the captain of the Varsity team during his Junior and Senior years. Bashaun excelled artistically and academically while at Lubbock High school, performing numerous roles in many of Ballet Lubbock’s professional productions, and received the top honor of being named All-Westerner Boy during his Senior year. Bashaun was offered a full academic and artistic merit scholarship to attend the University of Utah.

At the University of Utah, Bashaun was a member of the resident performing company, Utah Ballet from 2007-2011. During this time, he performed numerous Principle and Soloist roles and graduated with Honors in 2011.

Upon graduation, Bashaun was offered a contract to join the Ririe-Woodbury Dance Company, where he danced for an entire decade! As a member of the company, he set choreography and taught creative movement classes in over 100 Utah schools as well as toured extensively throughout the United States, Africa, France, Japan, Mongolia & South Korea to perform and teach master classes. As a professional dancer, Bashaun has performed the works of many renowned choreographers such as Alwin Nikolais, Murray Louis, Stevan Novakovich, Edward Truitt, Val Caniparoli, Rick Tija, Johannes Weiland, Bill T. Jones, Adam Barruch, Joanna Kotze, Netta Yerushalmy, Charlotte Boye-Christensen, Doug Varone, Yin Yue, Raja Feather Kelly and Daniel Charon, among others. Not only did his passion for performing grow during this time, but also, his passion for teaching. He  has also had the privilege of teaching master classes at renown universities such as Georgia University, The University of Utah, Utah Valley University, Texas A&M University, Texas Tech University, Brenau University, & Loyola Marymount University, to name a few. Bashaun is grateful for the opportunity and spaces to perform, choreograph and collaborate within the wonderful community of Salt Lake City. 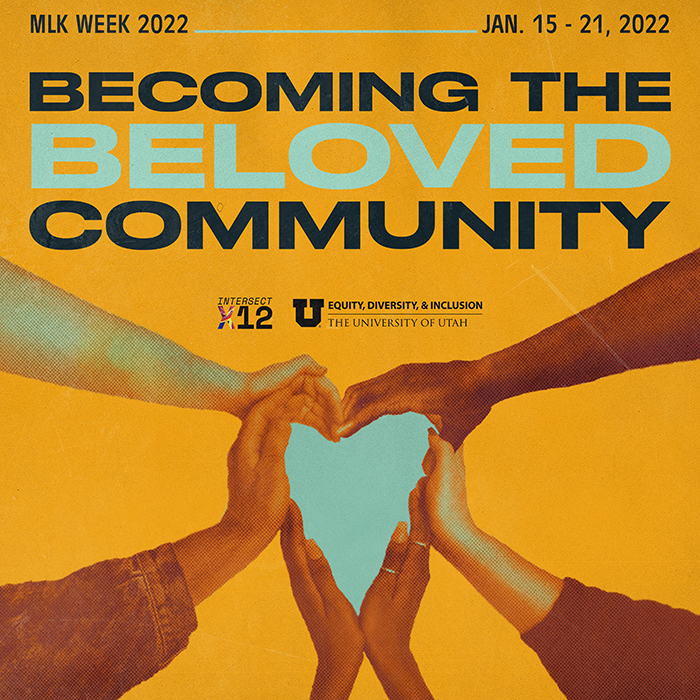 Dr. Martin Luther King Jr. Week (MLK Week) is a platform to engage students, faculty, staff, trainees, and community members in critical conversations around contemporary Civil Rights issues and race in America. Dr. Martin Luther King Jr. spoke of the “beloved community” as a nonviolent, just society where love and trust triumph over fear and hatred. In a year that has been filled with division, the 2022 MLK Week planning committee chose “Becoming the Beloved Community” as this year’s theme so we may explore ways to bridge the divide and work together to become the beloved community. Events and conversations throughout the week will honor Dr. King’s vision, offer direction, and challenge us to determine a better way forward.