“The legacies of racism that constrain us are deep and long, and we are not going to solve our discomfort with training. The work we must do is about rooting out the systematic racism that lives in the everyday. We must recognize that racism pervades the structures that have raised us and that we in turn have fostered. We cannot run from that system, but we can dismantle its roots. We must unearth, uproot and plant anew.”

Equity, Diversity, and Inclusion is taking a stand against racism and bringing the University of Utah to the forefront of the conversation through the launch of the Friday Forum series on Racism in Higher Education. Each month we will lead national conversations with the goal of helping attendees start on a journey to eradicate racism and share best practices for sustained growth and action. The first installation, “Confronting Our Racism” will include a panel hosted by President Watkins with special guests, noted historian, Dr. Nell Irvin Painter and political strategist and CNN commentator, Bakari Sellers.

After the general session, University of Utah attendees will have the opportunity to join one of the following breakout sessions to discuss how to move forward:

How to begin the journey towards anti-racism.

Breaking down the systemic racism that impacts our communities.

Nell Irvin Painter is a distinguished and award winning scholar and writer. A graduate of Harvard University, Painter went on to become the Edwards Professor Emeritus of American History at Princeton University. She is the author of seven books and countless articles relating to the history of the American South. Painter’s latest book, The History of White People, guides us through more than 2000 years of Western civilization, illuminating not only the invention of race but the frequent praise of “whiteness.”

Her critically acclaimed book, Sojourner Truth: A Life, A Symbol, won the nonfiction prize of the Black Caucus of the American Library Association. In Sojourner Truth, Painter focuses on the life of the black abolitionist and women’s rights advocate. A related article, “Representing Truth: Sojourner Truth’s Knowing and Becoming Known,” appeared in The Journal of American History. Painter is also the author of Southern History Across the Color Line, which moves across the divides that have compartmentalized southern history, women’s history, and African American history by focusing on relationships among men and women of different races.

Much of her writing has been concerned with southerners such as Hosea Hudson, Gertrude Thomas and Wilbur Cash. In more recent years she has been writing on the United States as a whole, as exemplified in her third book, Standing at Armageddon: The United States, 1877-1919, which won the Letitia Brown Memorial Publication Prize. Painter’s other books include The Narrative of Hosea Hudson: His Life as a Negro Communist in the South, Creating Black Americans, and Exodusters: Black Migration to Kansas after Reconstruction.

Painter has been featured as a narrator in the PBS historical series American Experience, which combines dramatic reenactments with commentary by historians and authors.

Warren Center for Studies in American History, the Bunting Institute, the Center for Advanced Study in the Behavioral Sciences at Stanford, and the National Endowment for the Humanities. Painter was selected as the President of the Southern Historical Association for 2007, President of the Organization of American Historians from 2007-2008 and is a recipient of the Brown Publication Prize awarded by the Association of Black Woman Historians.

Painter’s latest book is entitled Old in Art School: A Memoir of Starting Over, about her experiences during this time.

Bakari Sellers made history in 2006 when, at just 22 years old, he defeated a 26-year incumbent State Representative to become the youngest member of the South Carolina state legislature and the youngest African American elected official in the nation.

Earning his undergraduate degree from Morehouse College and his law degree from the University of South Carolina, Sellers has a tireless commitment to championing progressive policies to address issues ranging from education and poverty to preventing domestic violence and childhood obesity.

His impressive list of accomplishments in addition to having served on President Barack Obama’s South Carolina steering committee during the 2008 election, Sellers is widely considered to be a rising star within the Democratic Party and leading voice for his generation. That coupled with his uncommon ability to reach across the aisle and get things done has led to numerous accolades including being named to TIME Magazine’s 40 Under 40 in 2010 as well as 2014 and 2015 “The Root 100” list of the nation’s most influential African-Americans. Mr. Sellers will be releasing his debut book on Harpers Collins May 19 of this year. The book is titled My Vanishing Country.

Dr. Ruth V. Watkins, the 16th president of the University of Utah, is guiding the state’s flagship institution to unprecedented heights. President Watkins’ signature initiatives include degree completion, innovative student funding models, strong partnerships with community stakeholders, uniting the campus as One U to drive innovation in research, education, and operational efficiency, and addressing grand societal challenges such as mental health and interpersonal violence.

President Watkins inspires the U to innovate, discover, and deliver exceptional value in higher education and health care. For students, this means an excellent and affordable educational experience culminating in timely degree completion. Under President Watkins’ leadership, the University of Utah has significantly increased student success as measured by graduation rates and new avenues for access to a U education. For faculty and staff, excellence means providing unwavering support that enables creativity, collaboration, and impact, exemplified by rising research funding—a record of $603 million in 2020—and steady growth in the quality and quantity of scholarship focused on urgent societal concerns. For patients, excellence means innovative, compassionate, and affordable care at a nationally recognized health center that is ranked among the top 10 in the country for quality.

President Watkins has guided the U in its role as the University for Utah, cultivating broad and deep connections to communities and being responsive to the state’s workforce needs. The U produces more graduates in high demand fields than any other state institution and those graduates also receive the highest starting salaries compared to other Utah public schools. As an anchor institution, the U is meeting health care needs throughout the state and the region. As a result of President Watkins’ leadership, financial support for the university is at an all-time high and the U is well on its way to meeting a capital campaign goal of $2 billion.

In November 2019, the U was selected as a new member of the Association of American Universities. This is an invitation-only, prestigious group of 65 leading research institutions marked by excellence in academic expertise and research impact, student success, and securing resources in support of core missions.

The U’s excellence is marked by the variety of programs ranked among the best in the country, including its undergraduate and graduate entrepreneurship programs, full-time MBA program, and schools of computing, law, nursing, and medicine. The Wall Street Journal/Times Higher Education rated the U as No. 11 in the country for value in 2019. The U is ranked among the top 50 public research universities by U.S. News & World Report (2019).

President Watkins serves on the boards of the Craig H. Neilsen Foundation and the Tanner Lectures on Human Values. She also is co-chair of the Research Intensive Committee of the Association of Public & Land-Grant Universities, is a member of the AAU-APLU Presidents’ Working Group on Research Security and previously served as a member of the APLU’s Council of Academic Affairs Executive Committee. President Watkins also is serving on two boards focused on innovation and the role of post-secondary education in pandemic rescue and recovery—the COVID-19 Impact Coalition supported by Strada Education Network and the Higher Education Task Force sponsored by McKinsey.

Before her appointment in the spring of 2018, President Watkins served as the University of Utah’s senior vice president for academic affairs. She came to Utah in 2013 from the University of Illinois. At Illinois, President Watkins spent 20 years in leadership and faculty roles, including dean of the College of Liberal Arts and Sciences—where she guided the research, education engagement, financial, and developmental success of approximately 50 academic and research units—and vice provost and associate provost.

President Watkins graduated with the highest honors from the University of Northern Iowa with a bachelor’s degree in speech-language pathology. She earned a master’s degree and a doctorate in child language at the University of Kansas, where she was a National Institutes of Health pre-doctoral fellow. Her scholarship focuses on communication development and disabilities in young children. President Watkins’ research and training endeavors have been funded by the National Institutes of Health and the U.S. Department of Education, as well as Lumina Foundation. She was named a fellow of the American Speech-Language-Hearing Association in 2003. 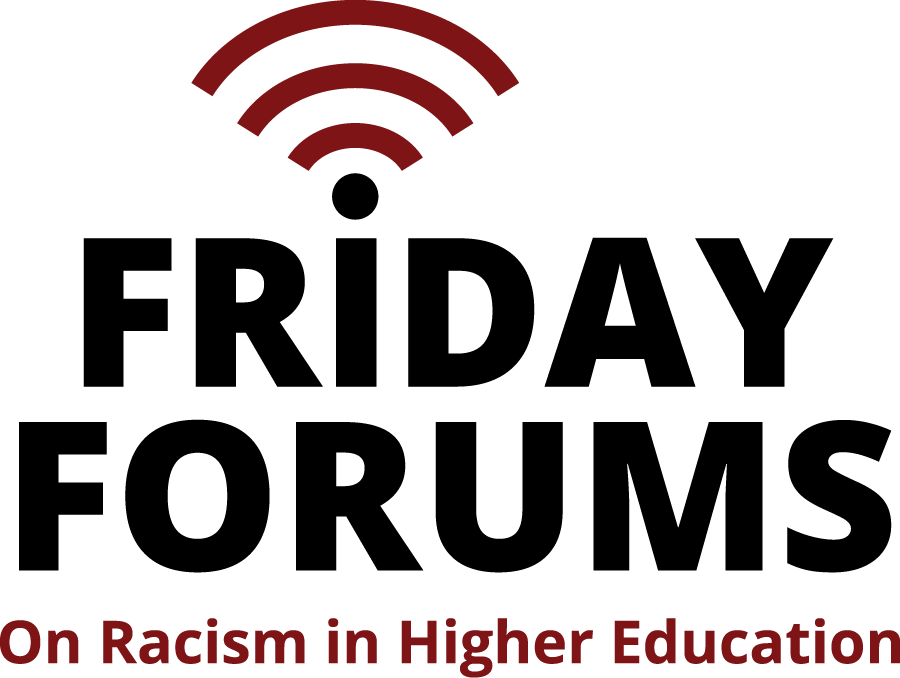 Friday Forums is a commitment to the state and region in elevating national conversations and showcasing models of disrupting complicit racism. Each session welcomes national thought leaders to lead discussions and provide opportunities for participants to share ideas on actionable items towards a diverse, equitable, and inclusive campus.