Join us for the kick-off event for MEDiversity Week! Dr. Sandro Galea will deliver a keynote address (12 – 1 p.m. MT), which will be followed by a panel, “Priorities for Health in the Post-COVID Era,” with experts from the state of Utah (1 – 2 p.m. MT).

Registration is required. A confirmation email with details for joining via Zoom will be sent after registering for this event.

Sandro Galea, a physician, epidemiologist, and author, is dean and Robert A. Knox Professor at Boston University School of Public Health. He previously held academic and leadership positions at Columbia University, the University of Michigan, and the New York Academy of Medicine. He has published extensively in the peer-reviewed literature, and is a regular contributor to a range of public media, about the social causes of health, mental health, and the consequences of trauma. He has been listed as one of the most widely cited scholars in the social sciences. He is past chair of the board of the Association of Schools and Programs of Public Health and past president of the Society for Epidemiologic Research and of the Interdisciplinary Association for Population Health Science. He is an elected member of the National Academy of Medicine. Galea has received several lifetime achievement awards. Galea holds a medical degree from the University of Toronto, graduate degrees from Harvard University and Columbia University, and an honorary doctorate from the University of Glasgow.

Valerie Flattes has been a faculty member at the University of Utah College Of Nursing since 2001. Her background in nursing includes medical surgical nursing, obstetrics, long term care, emergency nursing, and home health care. Since 2003, she has practiced as an adult nurse practitioner.  She completed her PhD at University of Utah Hartford Center of Geriatric Nursing Excellence. Valerie has a strong commitment to community engagement and has served as a member or officer in several community organizations over the last 21 years. Valerie has shown a passion for teaching and gerontology. She and has been a champion of enhancing gerontology content in the nursing curriculum in the undergraduate and graduate programs.

Ivette Amelia López, PhD, MPH is a Professor of Public Health at University of Utah Department of Family and Preventive Medicine. She is also the Deputy Director of the Utah Area Health Education Centers. Dr. López was born and raised in Caguas, Puerto Rico, and came to the United States mainland to pursue an advanced education. She is, and has been for over two decades, a dedicated professional in pursuit of health equity for Latinos and other disadvantaged populations in the United States. From AIDS (the epidemic that drew her to public health) to diabetes, obesity causal explanations among minority women, to Latina breast cancer survivorship, her research and service are dedicated to engage minority communities in finding solutions to their health burdens.

José E. Rodríguez, MD, FAAFP serves as Associate Vice President for Health Equity, Diversity, and Inclusion, is a professor in the Department of Family and Preventive Medicine, and Associate Medical Director at the Redwood Health Center.As AVP, Dr. Rodríguez has worked with teams across health sciences to increase the actions taken in the areas of Equity, Diversity and Inclusion throughout University of Utah Health. Scholarship has taken a central role in his office, and multiple manuscripts have been published highlighting the excellent work in EDI that has been happening across the Health Sciences Campus. He has served on the diversity committee as well as recruitment committees supporting focused recruitment of URM faculty and residents. He has presented at national conferences on our work and his research on diversity initiatives.

Prior to his appointment at the University of Utah, Dr. Rodríguez served as the co-chair of the Council on Diversity and Inclusion and the co-director for the Center for Underrepresented Minorities in Academic Medicine at Florida State University College of Medicine. His academic achievements include publishing several articles on the importance of URMs in academic medicine.

Jessie Mandle is the deputy director and senior health policy analyst at Voices for Utah Children. Jessie joined the organization in 2015. She focuses on health coverage, access to care, prevention and health equity for children, families, and communities in Utah.  Prior to joining Voices for Utah Children, Jessie was a Senior Program Planner with the City of San Francisco Department of Children, Youth and Their Families where she worked on after school and nutrition programs and policy. Jessie has also worked as a policy researcher in Johannesburg, South Africa, and managed a CDC-funded healthy communities grant in Portland, Oregon. Jessie studied government and environmental science at Wesleyan University in Connecticut and has a Master’s degree from Portland State University and the Oregon Health and Science University School of Public Health. 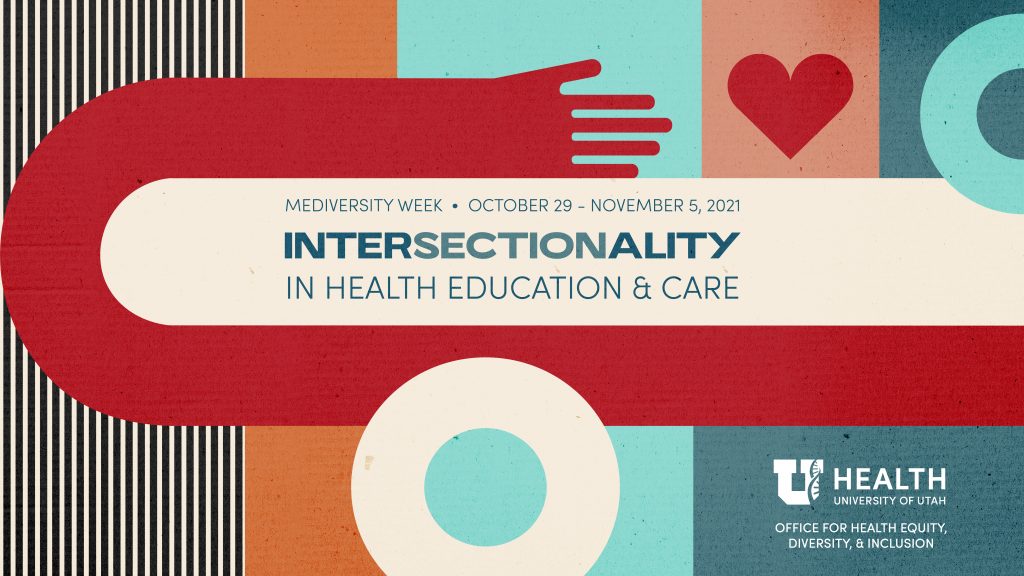 This event is part of MEDiversity Week.

The mission of MEDiversity Week is to highlight the equity, diversity, and inclusion work within U Health; while addressing health care disparities and offering solutions for the training of our current and future providers. The week’s events will focus on intersectionality in health education and care and facilitate discussions on how to continually advocate for equity and inclusion in our daily personal and professional lives.