In the weeks following the attack on the  United States capital – a horrific event where neo-Nazi symbols and White supremacist slogans figured large, many commented on the disturbing junction including the UN Secretary-General who noted,

Anti-Semitism is the oldest, most persistent and entrenched form of racism and religious persecution in our world.

But it did not end.  Antisemitism continues to blight our world.  It is sad, but not surprising, that the COVID-19 pandemic has triggered yet another eruption of this poisonous ideology.  We can never let down our guard.

Today, Holocaust denial, distortion and minimization are resurgent.  In Europe, the United States and elsewhere, White supremacists are organizing and recruiting across borders, flaunting the symbols and tropes of the Nazis and their murderous ambitions.  We have seen shocking examples in this nation’s capital in recent days.

The Anti-Defamation League found that the American Jewish community experienced the highest level of antisemitic incidents in 2019 since tracking began in 1979.  The COVID-19 pandemic has provided new areas for neo-Nazi activities.  As people spend more time at home and online, white supremacists and neo-Nazis are using social media platforms to disseminate propaganda and create fear and hatred.

They exploit the anxiety and social turmoil created by the pandemic to target minorities, based on religion, race, ethnicity, nationality, sexual orientation, disability and immigration status.  They even trade information on how to infect minority communities, by effectively making themselves into bioweapons.

Tragically, after decades in the shadows, neo-Nazis and their ideas are now gaining currency.  The United States authorities have warned that white supremacist and nativist movements are on the rise across the country and around the world.  For the first time, they have designated white supremacist leaders as terrorists.

The continued rise of white supremacy and neo-Nazi ideology must be seen in the context of a global attack on truth that has reduced the role of science and fact-based analysis in public life.  These attacks are dangerous and deliberate.

This raises important questions that will lead us more broadly to a discussion of the dynamics of nativist othering: how White Nationalism plays into White supremacy; and how antisemitism is closely related to various forms of nationalist and White supremacist othering of African Americans, Asians, anyone not white/Aryan, the LGBTQIA+ community, gypsies, and so on.

Benedicte Dansie graduated from the University of Utah with degrees in English (BA) and History (BA). She wrote her history senior seminar on how migration affected the genocide of Roma and Sinti during the Holocaust. While at the university, she completed an internship working at the Auschwitz-Birkenau Museum in Oświęcim, Poland. Benedicte will attend the University of Edinburgh in the fall, pursuing an MScR in Collections and Curating Practices. During her studies, she plans to focus on Holocaust Museums, outreach, and education.

Preston Foster is an Assistant Professor and the Director of the Public Policy program at Oakwood University.

Foster spent 20 years as a marketing executive at AT&T, and 6 years as a public affairs and business development executive at Educational Testing Service. In 1994, President Bill Clinton appointed Foster to a White House Fellowship, where he served as US Deputy Assistant Secretary of Education. Foster has a bachelor’s degree in business administration from Oakwood University and earned a MPA from the Kennedy School at Harvard. Preston is the founder of WhatTheyShouldSay.org — a political communications platform, the United Collegiate Black Scholars — a public policy think tank.

Nicole Hemmer is an associate research scholar with the Obama Presidency Oral History Project at Columbia University and author of Messengers of the Right: Conservative Media and the Transformation of American Politics. She is the creator and host of the podcast A12: The Story of Charlottesville, and co-hosts the podcasts Past Present and This Day in Esoteric Political History. She writes a weekly column for CNN Opinion.

Dr. Jacobson is Professor Emeritus of Infectious Diseases and Medical Ethics at the University Of Utah School of Medicine. He trained at the U. of Florida, the CDC, and the U. of Utah. He joined the Internal Medicine Department in 1978. In 1989, after further training at U. of Chicago, he established the Division of Medical Ethics with multidisciplinary colleagues. He served on the AMA’s Council on Ethical and Judicial Affairs, the American College of Physicians’ Ethics and Human Rights Committee, local Ethics Committees, and chaired the School of Medicine’s Institutional Review Board. He published over 100 articles, book chapters, and the recently reissued book, The Patient as Victim and Vector: Ethics and Infectious Diseases. He is a Past President of the United Jewish Federation of Utah and Chair of its Task Force on Antisemitism and its Partners Against Hate, successful advocates for Utah’s Hate Crimes Law.

Maeera Shreiber is an Associate Professor Department of English at the University of Utah. She is the author of Singing in a Strange Land: Jewish American Poetry and Poetics (Stanford University Press, 2007) as well as numerous articles in journals such as AJS Review, Prooftexts and PMLA on poetry, religion, and Jewish thought. She was awarded fellowships from the Stanford Humanities Center, the National Humanities Endowment and the Frankel Institute for Advanced Jewish Studies. Recently she was a Senior Fulbright Scholar at Haifa University.

She has currently completed a monograph entitled, Holy Envy: Writing in the Judeo-Christian Borderzone and is now co-editing a collection of essays and annotated translations focusing on the relation between prayer and contemporary Hebrew poetry with Professor Wendy Zierler (Hebrew Union College).

Reframing the Conversation brings together experts from across campus and the community to spark important conversations around racism, othering, and safety. With these conversations, we are striving to counteract the growing culture of othering with a culture of belonging.

While we continue to identify and remove barriers and bias incidents targeting our campus community, persistent strides towards an institution where every member is given the opportunity to be educated on equity, diversity, and inclusion efforts will remain at the forefront of our work.

Registration is required to attend. 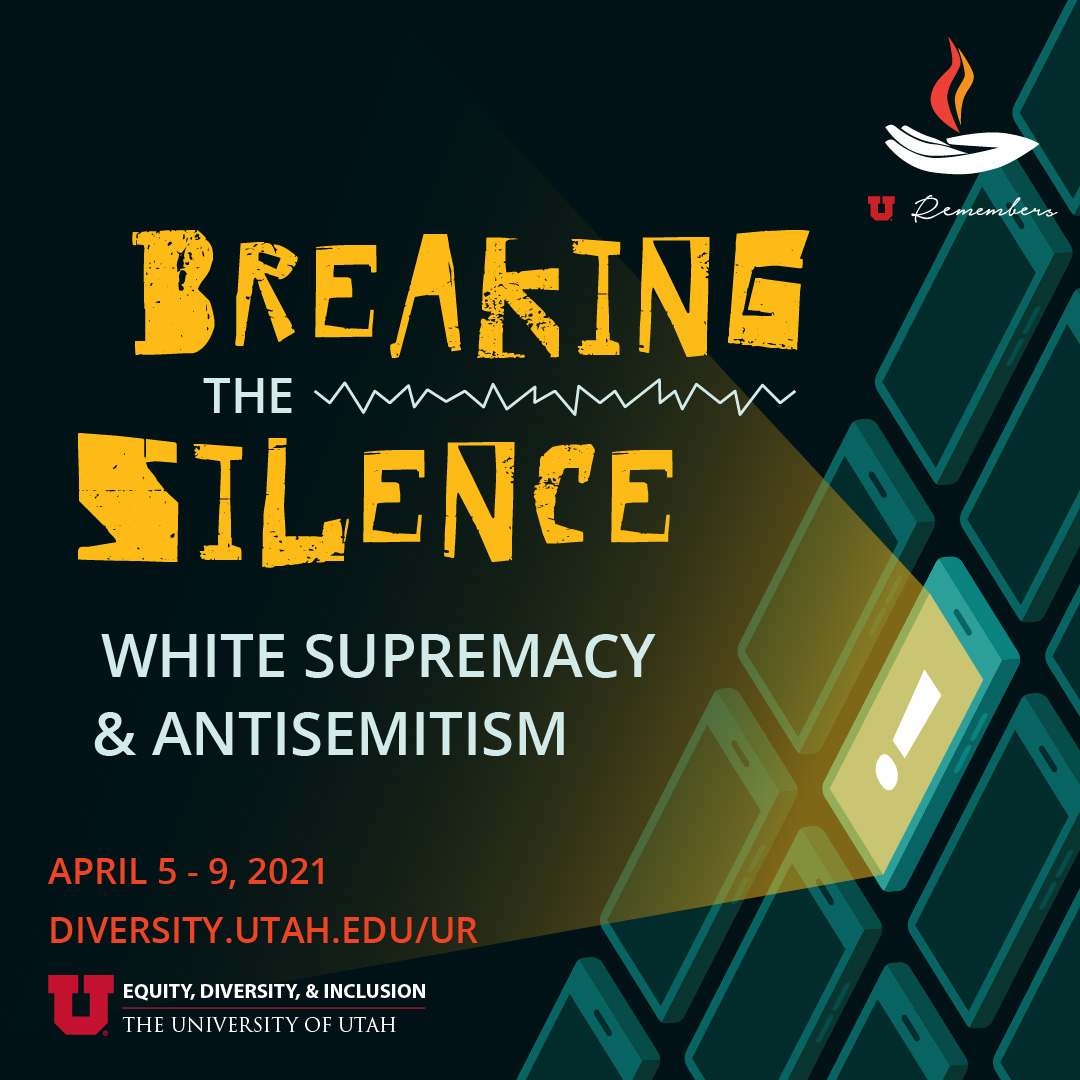 U Remembers reflects on the historical effects of racial discrimination and invites us to make connections between the past and contemporary social issues. This year’s theme, “Breaking the Silence,” and events will aim to inspire our community to learn and become involved in combating the rise of antisemitism, moving from bystanders to active participants in the work eliminating hate in all its forms.