Parallels of the White Rose Resistance

Dr. Jud Newborn, our 2018 U Remembers keynote, draws lessons and parallels from resistance during the time of the Holocaust and the resistance in today’s current events.

“U Remembers” is an annual event that reflects on the historical effects of genocide and pulls parallels from contemporary social issues of today. This year’s theme “Unified Resistance: Tales of the White Rose” will discuss the German university students who formed the Nazi resistance group called the White Rose.

The U Remembers planning committee would like to thank their sponsors: The Office for Equity and Diversity, Ron Smelser Holocaust Education Fund, U of U Religious Studies Program, and U of U Jewish Studies Initiative.

Black Lives Matter, MeToo, anti-Islamophobia, LGBTQIA+ rights, pro-choice, sanctuary cities and many others are examples of unified resistance groups seeking civil rights today. These movements are primarily led by our youth and influenced by our current social, economic, political and environmental climate. But if we were to take a trip back into history, what types of collective movements would we find? Were resistance tactics similar to today’s? And who were the young voices behind these movements? Jud Newborn, a New York-based author, historian and the 2018 U Remembers keynote speaker, will draw lessons and parallels of the Holocaust and the resistance in today’s current events.

Newborn co-authored a book called, “Sophie Scholl and The White Rose,” a true story that took place 75 years ago during the time of the Holocaust. The White Rose was a group formed by German students at the University of Munich with a goal to resist against the Nazi regime using the power of language. Siblings Sophie and Hans Scholl led the White Rose movement and soon began distributing hand-printed leaflets inspired by a combination of famous poets and anti-Nazi rhetoric. Bold in language, each leaflet denounced the crimes and oppression by Hitler and the Nazi regime:

“Seit dem Anfang des Krieges … Since the beginning of the war 300,000 Jews have been murdered in the most bestial manner. This is a crime unparalleled in human history – a crime against the dignity of man. But why tell you these things when you already know them? Everyone wants to be exonerated, but you cannot be – because everyone is guilty, guilty, guilty.”

“Every honest German today is ashamed of his government, a government that committed the most horrible of crimes — crimes that indefinitely outdistance every human measure.”

“Wir Schweigen nicht!… We will not be silent! We are your bad conscience. The White Rose will not leave you in peace!”

“The handful of university students making up the White Rose resistance began their tireless efforts to arouse those complacent and uncaring Germans late in the regime, when Nazi power was already consolidated, its destruction of democracy fulfilled, and its most heinous crimes against humanity well underway,” says Newborn. “Their resistance was a lonely affair, operating in isolation, when the regime they were protesting was fully entrenched in all ways.”

The White Rose leaflets urged readers to protest the so-called “Final Solution to the Jewish Question,” and to sabotage the systemic abuse by the regime. These leaflets encouraged German Christians to take a deep look at their fundamental responsibilities and values as Christians – which profoundly contradicted the beliefs and propaganda of the Nazi Party. 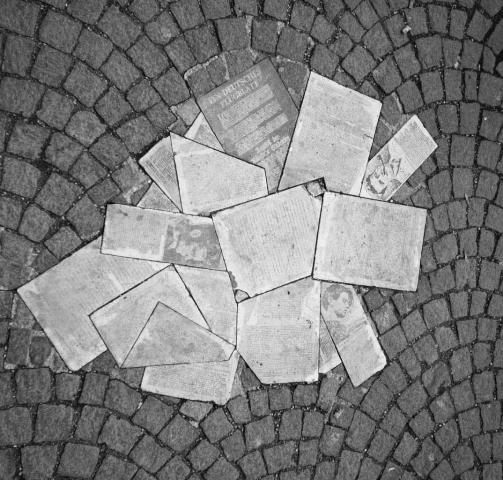 On Feb. 18, 1943, Sophie and Hans left stacked leaflets across the University of Munich. Demonstrating her protest, Sophie tossed extra copies of the leaflets from the atrium – and like white rose petals swaying from the sky, hundreds of prints fell above the heads of students. This action led to both siblings being discovered, convicted of high treason and immediately executed.

“The White Rose staged the only public protest by Germans against Nazism ever to occur. This last act brought them literally under the Nazi blade – but it also led them to step into history,” says Newborn.

In Germany today, the White Rose students and their story have become iconic. Hundreds of streets and schools are named after them. German voters chose Sophie and Hans as part of the top 10 most important Germans of all time on a nationwide TV competition. Newborn adds, “Over the many decades since the Nazi era, Germans have taken a very bumpy but evermore determined road to confront their nation’s Nazi past,” Newborn adds. “This includes the ugly reality that a majority of Germans enthusiastically supported Hitler’s racist, anti-Semitic regime, swept away by Hitler’s hateful demagoguery and his promises to make Germany great again, no matter how brutal and criminal the means.”

And in the US, students have turned into nationally known grassroots activists seven times in history according to The New York Times. The most recent of those times include the Black Lives Matter movement after the police shooting of Michael Brown – when students marched with their community on the streets of Ferguson, Missouri. It also includes the students of Stoneman Douglas High School in Parkland, Florida – who continue to protest against gun violence and address issues of gun control.

“The tactics that the White Rose are still relevant around the world. Protest through art and language continue to be a means of pointing out hypocrisy, corruption, and cruelty. Today, technology and social media provide new tools for mobilizing young people to make positive changes in the world around them,” says Julie Ault, assistant professor for History at the U and chair of the U Remembers Committee. “The White Rose is a reminder of how vital young people are in challenging the status quo—whether under dictatorship or in a democracy—as they seek to correct injustice.”

Through his work, Newborn promotes ways for young people to engage both on a local scale and a global scale.

“We can use the internet and social media in creative ways. We can contact our own political representatives and clergymen, reporters, radio talk show hosts and others. We can create forums for discussion among the civic groups in our own communities. We can try and engage our mayors, city councils, business and community leaders…We can organize rallies, vigils, and other consciousness-raising and educational events… You can be an ‘Upstander’ in the smallest ways and still have an effect. There are many ways to ‘Speak Truth to Power’ – and awaken others to join us – if only we act soon enough, in the name of our democratic values and our common humanity.”